In 1962, Rachel Carson published Silent Spring, bringing to light the harmful effects of the pesticide DDT. Since then, we have been searching for safer alternatives. But are ultrasonic pest repellers the answer?

There is limited scientific evidence to show that ultrasonic pest repellers may harm humans. Indeed in adults, there are no discernible effects. However, if there is a negative effect, it would be most pronounced in babies and young children, as they have the most expansive hearing range.

Exposure could potentially cause disruptions in mood and cognition, but more studies are needed to prove this. This situation requires you to weigh the evidence and decide what is right for your family. We will help provide both sides of the story to help you make an informed decision.

Is Ultrasonic Sound Safe for Humans?

So, above, we learned that the claims of efficacy of ultrasonic pest repellers are shaky at best. But, many anecdotal reports of them working and new models come on the market annually.

So, you may decide that you want to try one because they are cheap, and anything is better than exposing your family to dangerous chemicals. And if you are like me, then the first time you had to remove a mouse from a glue strip was also your last.

But are they safe for your family?

As we discussed above, ultrasonic waves only sound at a higher frequency than we perceive. While very high frequencies can cause damage, that is 1-3 million Hz, not the 65,000 Hz of most pest repellers.

There is some concern that ultrasonic noises in our environment could be causing us harm. But studies have found this difficult to quantify or prove, leaving little to be afraid of.

So, if the ultrasonic waves caused by manufacturing and other sources in our urban environments are not a cause for concern, what about the focused ultrasonic waves from the repellent devices?

There is little to no evidence that ultrasonic pest repellers harm humans.

One of the best-designed studies tested the effects of ultrasonic rodent repellers on human test subjects. They exposed young adults (age 18-25) and middle-aged adults (age 46 – 58) to the devices in several experiments and asked them to complete surveys of how they felt.

They found that the ultrasonic range did not cause any marked effects on the participants regarding 15 different factors (nausea, concentration, pain, dizziness, etc.)

But, they noted the devices simultaneously emitted another sound frequency at only 4-5 kHz, much lower than the 65 kHz intended. This second sound caused a few participants to experience mild tinnitus (ringing in the ears) or difficulty concentrating.

While this was not a significant threat to human health, it led to the author’s conclusion that regarding “children and pets, we cannot conclude that exposure to ultrasound is less hazardous than audible sound until more research has been done.”

There may be some ground to believe that these ultrasonic devices are more of a threat to children and babies than to adults.

The range of sounds we can hear decreases as we age. A child can listen to sounds of a higher frequency than adults can. While ultrasonic waves will not cause physical damage, they could decrease concentration and increase agitation.

While these effects are likely mild and temporary, you should decide if they outweigh the positive impact of the devices.

As we discussed with pests, they become accustomed to it when no negative stimuli are associated with the sound.

This observation relates to the famed experiments of Pavlov involving classical conditioning.

You may recall that Pavlov rang a bell and then provided dogs with food. After a time, the dogs became conditioned to hear the bell and salivate, even without food.

So, following these findings, we know that many household pets can hear the ultrasonic pulses emitted by these devices. However, because there is no punishment or negative stimuli following them, they get acclimated and ignore the sounds.

Classical conditioning is the same thing that happens with rodents and is why they may work for a short amount of time, but usually not in the long term.

So, for the most part, you have little to worry about regarding the safety of such devices for pets.

What Does ‘Ultrasonic’ Mean Exactly?

We first need to understand what precisely ultrasonic waves are and how they work.

You probably know that the sound we perceive is energy waves traveling through the air. These waves then hit our eardrums (and bodies), causing them to vibrate, which we perceive as sound.

Different sounds have different frequencies, or essentially the cycles between their peaks and valleys. If you sit on the beach and watch the waves come in, the frequency might be something like one wave every 6 seconds.

The human ear can perceive sounds of a frequency between 20 and 20,000 Hz (20 kHz). Anything above 20,000 Hz we call ultrasonic. Ultra- coming from the Latin word meaning ‘located beyond,’ and sonic from the Latin sonus, meaning ‘sound.’

So essentially, ultrasonic is any sound above the frequency we perceive.

Whether we realize it or not, our environment is full of ultrasonic waves. These originate from many appliances, machinery, insects, and even animals like bats.

These do not harm us because we can not perceive them. However, if the frequency gets high enough, to about 1 million Hertz (1 MHz), they can raise the temperature of our skin and even cause burns.

How Do Ultrasonic Pest Repellers Work?

Knowing how ultrasonic waves work helps us understand how to use them to repel pests.

While we cannot perceive sound waves over 20 kHz, many animals and insects can. These high-frequency waves are how dog whistles work and how bats communicate.

Below is a table that shows the sound wave ranges (in Hz) that different animals can hear:

As shown in the table above, many animals have a hearing range far exceeding humans.

Given this information, the makers of ultrasonic pest repellents claim that they can emit a sound wave that will annoy and disturb rodents and insects, but not humans. It will not harm them but cause them to move and nest somewhere else. At least in theory.

A 2007 study by Cochrane tested their effectiveness against mosquitoes and found no evidence whatsoever that they worked as advertised. They also stated “no justification for marketing them to prevent malaria infections.”

In 2001, the Federal Trade Commission warned more than 60 manufacturers of the products concerning unsupported claims of effectiveness. That warning stated that they could not continue to make any of the following claims to consumers:

In studies that did find some efficacy, it was short-lived. It suggests that because there is no actual punishment or pain associated with the sounds, animals become accustomed to them over time.

It’s a bit like a scarecrow. It may fool the birds at first, but they eventually lose their fear of it when it fails to chase them from the crops.

It is possible that changing the frequency regularly to keep from conditioning them could help, but there is little evidence for that.

In conclusion, while there are many anecdotal reports to bolster the optimistic claims of manufacturers, the science says otherwise.

Is it Safe to Use an Ultrasonic Pest Repeller?

While the study did find a trace level of issues involving ringing in the ears and difficulty concentrating, there is no evidence that this is worse than from sounds we can perceive.

It logically follows that such devices are safer than chemical pest controls and more humane than many traps or glues.

However, it is essential to note that the study quoted above was not performed on children or household pets like dogs and cats, all of whom have a wider range of hearing than adults.

Are There Any Safe Sonic Repellents That Do Work?

While the ultrasonic devices we have looked at so far show little to no effect, that does not mean it is a complete dead end.

Pursuing such technology is still very attractive as it would decrease our reliance on toxic chemicals, inhumane traps, and other devices. If they worked, it would be a win for both human health and the economy.

According to a review out of the University of Arizona, some devices do show great promise.

The first was a device created in 1949 that broadcasted the mating sounds of female mosquitoes. When played through loudspeakers, this effectively attracted male mosquitoes into traps.

In another study from 1998, Canadian Geese alarm signals were played through a speaker, resulting in 71% fewer geese near the source.

Testing on bark beetles resulted in similar results. A 2013 study played their distress call back to them and reduced their numbers in a Ponderosa Pine Forest by 72%.

All these studies show that targeted and specific sounds work much better to deter pest species than the random ultrasonic pulses created by most of the devices commonly sold to consumers. 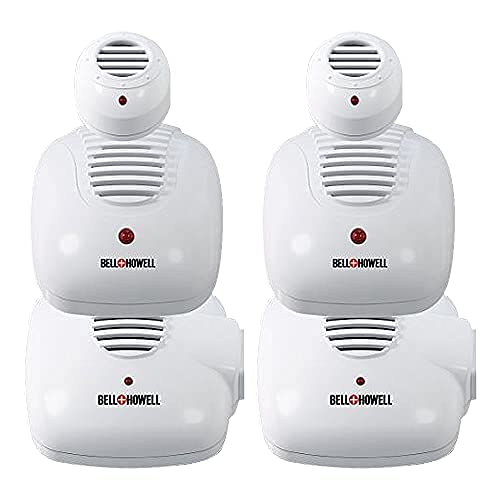 Are Ultrasonic Pest Repellers Worth the Cost?

As explored throughout the article, while the manufacturers claim these devices are safe and effective, little evidence supports this.

The FTC has already ruled that they cannot be marketed as effective or as a working alternative to chemicals and other deterrents.

But, that does not mean there will never be one that works. Some studies using more complex or focused sonic and ultrasonic methods can be effective.

Many anecdotal reports also show them working for people’s homes and gardens. They appear safe, with little to no effect on adults and minimal concerns for children or pets.

If they can decrease the use of cancer-causing chemicals that persist in the environment for hundreds of years, why not give them a try? Just have realistic expectations, and don’t blow the bank purchasing them.

It’s alarming to know whether what you have in your house can harm the family. Companies advertise ultrasonic pest repellers as safe for humans, but there is limited scientific evidence that they may be harmful.

They emit ultrasonic noise at a frequency too high for human ears to detect, and this repels pests such as mice or rats out of an area by making them feel uncomfortable. There are no discernible effects in adults; however, if there is a negative effect, it would most likely occur in babies and young children because their hearing range is wider than in adults.

If you’re considering buying an ultrasonic pest repeller, I recommend doing some more research first, especially if you live with small children who crawl around.